The Informed Universe – There Was No Big Bang! 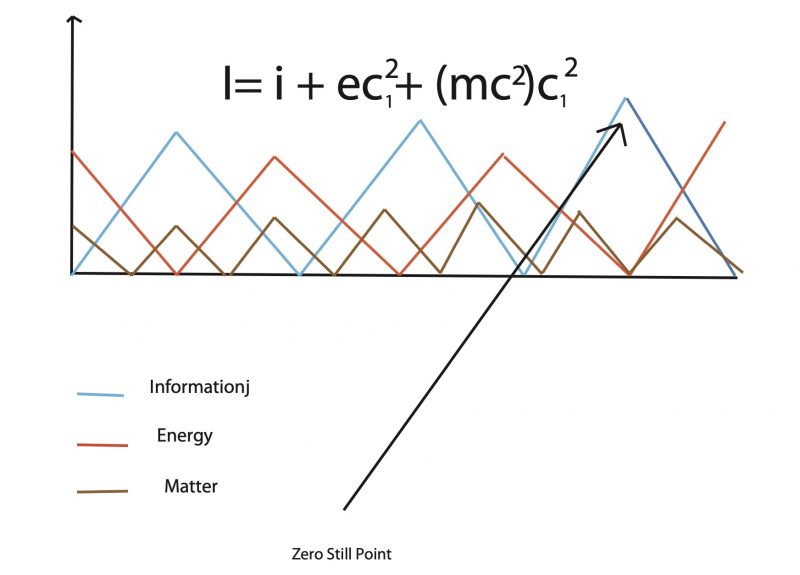 The concept is in the word! In-Form i.e. to create form, the basic character that identifies every material thing in the universe, from the smallest particle to the grandest constellation.

Perhaps “information” is the ultimate essence of the universe?

We are used to Einstein’s great equation: E = MC2
where a small amount of matter is equivalent to a vast amount of energy.

Consider another equation for a moment: I = EC’2
where a small amount of energy is equivalent to a vast amount of information. The C’ in this equation may not be the speed of light as in Einstein’s equation but some other number of similar magnitude, the precise value is not as important as the idea of this potential conversion.

Now we are ready to do a “mind experiment”.
Imagine starting with our universe composed of matter, energy, and information.

Imagine converting all the matter in the entire universe into just energy added to all the energy already there would give us a universe of just energy.

Now imagine converting all this energy into information added to the information there already.

We now have a universe composed only of information.

Information or pattern needs no time or space to exist, if you doubt this, again imagine an equilateral triangle perhaps with sides of a few centimeters, make it smaller and smaller in your mind’s eye until it is just a point. Then expand it to as large as you want – it is still there. A point has no dimension or dimension “0”, thus the total information of a transformed universe could occupy no space in no time.

This is an alternative view of “The Big Bang”, the “Zero Point ”

If we inhabit a learning universe, you and I may well be contributing throughout our lifetime in a permanent way, “adding to the database on the Universe’s HardDrive”! This might explain many strange phenomena such as parapsychology, psi, and intuition, that don’t fit neatly into modern reductionist, mechanistic science. Perhaps genes only provide the basic building block information of all living things, the type of material, the type of coverage, the style, etc. but the final design plan comes from the cosmic information base. I have always been intrigued by the similarity of television aerials to the form of pine trees. Is the structure of plants a reflection of this source of formation? Many books have been written on this theme but this viewpoint has not been accepted yet by modern science.