How a Meaty Diet Destroys the Planet 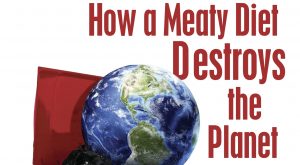 Click on the image above to go to the Good Medicine Magazine article.

“If every person in the United States ate no meat or cheese for just one day a week, it would be like taking 7.6 million cars off the road, so let’s just do that seven days a week,” urged Leslie A. Duram, PhD, a professor of environmental studies at Southern Illinois University and a Food for Life instructor, who discussed diet’s impact on greenhouse gas emissions at the Physicians Committee’s Plant-Based Climate Summit in April. She used a quarter-pound hamburger to illustrate the environmental impact of animal agriculture. In addition to contributing to greenhouse gas emissions, it requires 460 gallons of water and 64.5 square feet of land—both used, in part, to grow crops to feed the cows who are slaughtered for their meat to make the hamburger. “If we instead grew food crops for human consumption, we could feed 4 billion more people,”

Meat and dairy production releases greenhouse gases into the atmosphere, which is trapping heat and leading to global warming and climate change. Cows used for meat, dairy, and leather production belch methane into the atmosphere, and nitrous oxide comes from manure and fertilizer used for animal feed. “If cattle were a country, they would rank third in greenhouse gas emissions, behind China and the United States,” said Dr. Duram. “One cow produces as much methane as about 80 cars on the road.” The World Health Organization has advised, “Studies show that cutting back on red meat production reduces the nitrous oxide released into the atmosphere by fertilizers and animal manure. Nitrous oxide is the third most important man-made greenhouse gas and the most important anthropogenic contributor to stratospheric ozone destruction. Reducing livestock herds would also reduce emissions of methane, which is the second-largest contributor to global warming after carbon dioxide.”