Would Anyone Take the Jab if They Knew This? 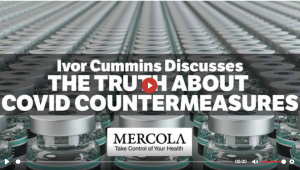 Click on the image above to watch this video.

Official Control Groups Have Been Eliminated

This is in fact precisely what Moderna and Pfizer have done: Both have eliminated the original control groups in their initial COVID injection trials by giving controls the real mRNA shot. This was done even though the trials are officially ongoing for another two years. So, they have already eliminated the control groups in the trials against which to assess the effectiveness and safety of these injections.

Side Effects and Deaths Are Vastly Under-reported

Unfortunately, many countries simply aren’t reporting side effects, so it’s very difficult to get a grasp on the real-world magnitude of the risks involved with these injections. As noted by Cummins:

“In Ireland, I have people on the inside of the medical system, and overwhelmingly, nothing’s getting recorded. When people have a reaction, they send them to the emergency room. The emergency room just deals with it. No one picks up a pencil or a pen. I mean, that’s just across the board. So, I’ve heard the estimate that on average, the recorded issues, you might be able to multiply by 5 to 10 to get the actual number.”

As noted by Cummins, studies have revealed that it only takes a couple of months to brainwash people, at which point their reasoning ability has been effectively destroyed. “They just can’t see reason after that because their brain has been [re]formed,” he says. We’ve now been under a constant 24/7 barrage of misleading propaganda for a year and a half.

They knew, ‘Once we’ve got a conduit, or a channel into every house, and we feed them what we want to feed them, we’ve got them.’

How to Improve Your Immune System

Anyone familiar with natural health will probably agree that having a robust immune system is your best bet against any and all infections.…you don’t need to spend four or five months getting fit. You don’t need to lose all the weight…….and in a few weeks, you’re going to be utterly more capable of changing a serious illness into a mild course of illness, or even of changing a death into just a nasty round of flu

Ideology, Not Science, Rules the Day

“It just shows that this is an ideology,” Cummins says. “It’s not about science. It was never about science. It’s about economics, profiteering, control, getting in ID cards. Probably, digital currency will be coming in. They want the ID card to get everyone’s metrics locked in for access. All of these bad things, they’re all ideologies. None of them are scientific.

Now they’re coming after the kids. I mean, you don’t have to be anti-vax, you just have to be rational, to look at the impact of SARS-CoV-2, look at the vaccine data and the real-world empirical data of the country comparisons that show the vaccine’s not doing much. And then look at what they’re actually trying to do — vaccinate all the children — and you just know it’s completely perverse… 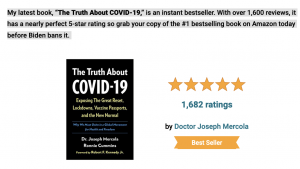 Just click on the image above to buy Dr. Mercola’s book.