Why Vaccine Injuries Are Rarely Reported 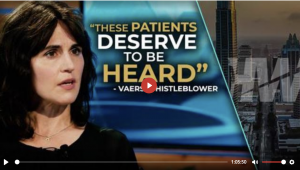 Click on the image above to view the full report.