The Many Ways in Which COVID Vaccines May Harm Your Health 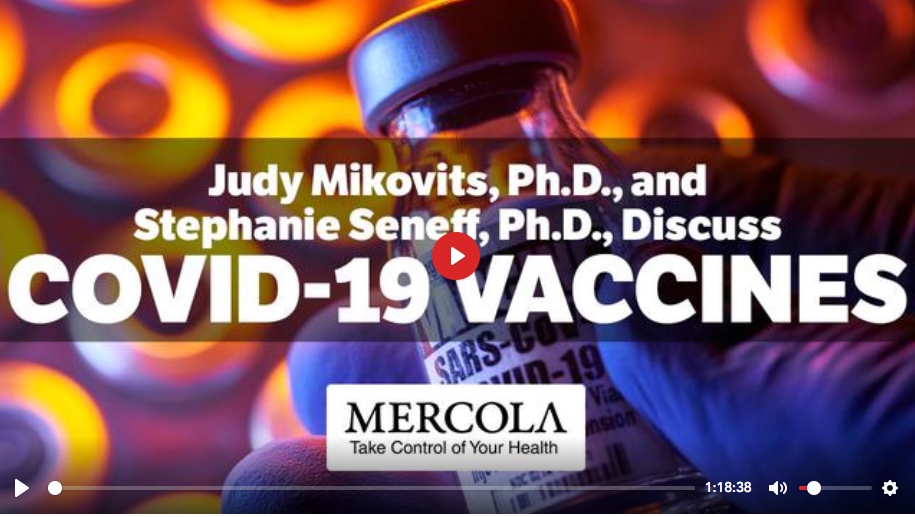 Click on the image above to watch this informative video.

In this interview, Stephanie Seneff, Ph.D., and Judy Mikovits, Ph.D., a dream team in terms of deep insights into the scientific details, explain the problems they see with gene-based COVID-19 vaccines. There is a load of highly useful technical information that you can use to defend your opposition to these dangerous vaccines.

However, unless you have deeply studied molecular biology and genetics, it would be wise to view the video two or three times, as with each review, you will learn more and understand just how dangerous these vaccines are. I recently interviewed Seneff about the excellent paper1 she published on this topic. That interview was featured in “COVID Vaccines May Bring Avalanche of Neurological Disease.”

In May 2020, I also interviewed Mikovits about the possibility of these vaccines causing reproductive harm and other health problems. At the time, Mikovits warned that fertility rates may drop thanks to the SARS-CoV-2 spike protein creating antibodies that attack syncytium, and indeed, we’re now starting to see that.

Still, the U.S. Centers for Disease Control and Prevention are recommending pregnant women get these vaccines, as well as children as young as 12, which is unconscionable, considering the potential lifelong risks and impairment of fertility.