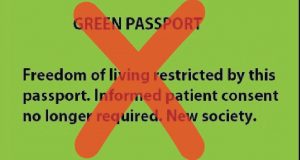 What price freedom? Is this just a bad dream?

After months of denials, the government is currently looking into the logistics of a health certificate/health passport system to enable a return to some form of normality in our day-to-day lives.

They denied it was going to happen despite having already sold the tender to it in November 2020.

So the health passport which Bill Gates said was needed by the world early in 2019, and was also talked about in 2019 in an EU commission memo around the same time, along with the need to stockpile vaccines for potential pandemics, etc. is now almost upon us.

Well, they remove all your freedoms and civil liberties, restrict your movement, create in effect a giant open prison, then, they dangle the prospect of “freedom” under your nose, under the guise of mass, yearly, experimental vaccines, and here’s the kicker, an app which not only tells what your vaccination status is, but also tracks and traces you, and your movements everywhere you go, and if your health certificate/passports doesn’t flash green, then it’s no entry to pubs, restaurants, sports arenas, concert halls, major shops, supermarkets.
In Israel, the most vaccinated country thus far, it’s called a green pass, and unless you’re vaccinated, you’re unable to access many of the freedoms granted to everyone else, including sunbeds and access to the beach. Businesses that allow access to premises to non ‘green pass’ holders are being fined the equivalent of $1500. Do we want to follow this example that reminds one of a past totalitarian state?

There will be some conversations going round in about ten years’ time with those of us that are left and their children, “what did you do when the totalitarian global takeover started dad?”
“Well son, I wore my mask, obeyed all the rules, queued patiently inline for my vaccine”
“Didn’t you fight back dad, what about the freedom protests? Did you support them, or even go on any of them?”
“No son, I called them freedumb, and blamed them for the spread of what I now realise, was just an endemic virus, like colds and flu”
“What was it like being free dad?”
“Don’t worry about that now son, those days are gone, now remember, you got your school assembly, and maths and English on zoom from 10 am, and someone from human augmentation team is coming to microchip you at 11:30”
Ok, I digress, but I think you get my point. We aren’t going to get our freedoms back by obeying the rules and blindly and obediently doing everything they say.
We only get our freedoms back if we demand and take them back, and that means saying NO right now.
Mass vaccinations aren’t the map to freedom, just like mass testing wasn’t the way out.
A digital tracking and surveillance device, on a global scale, isn’t your path to freedom, it’s your path to enslavement, so you may want to wake up now, before it’s too late, after all, if ya still here, you will need to look your kids and your grandkids in the eyes and explain to them how your generation gave away all the freedoms and civil liberties which our forefathers fought for in world wars.
Lingard BSc(Econ). DO. BBEA. PBNut.Cert.2021-04-06T17:49:56+01:00