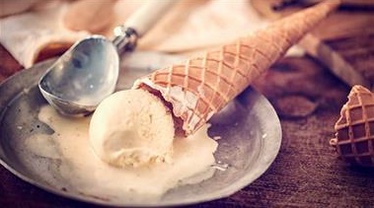 Click on the image above to learn of an alternative;

Brave Robot is one of the ice cream brands using Perfect Day’s GE non-animal whey, which is billing its product as “the world’s best tasting and most sustainable dairy ice cream.”9 While pointing out the obvious — that conventional and factory-farmed dairy production is not good for animals or the planet — they suggest that the only alternative is to create a synthetic food produced in a laboratory.

Brave Robot, by the way, is essentially the same company as Perfect Day. Three months after the FDA gave the GE whey protein GRAS status in April 2020, Perfect Day co-founded The Urgent Company, which created Brave Robot as its first brand.10

Perfect Day is marketing itself as environmentally friendly, citing a greenhouse gas life cycle analysis that found Perfect Day’s GE whey protein is 85% to 97% lower in emissions than comparative bovine dairy proteins.11 According to the findings:12

“If US consumers switched entirely to Perfect Day whey protein, this would save up to 246 million tons of CO2e emissions, which is the equivalent of up to 28 million homes’ energy use for one year (all the homes in New York and California combined) or up to 53 million passenger vehicles driven for one year (all the cars in NY, CA, TX, and FL combined), according to the US EPA Greenhouse Gas Equivalencies Calculator.”

This is just merely a fabricated fantasy PR spin, as it’s comparing its product to conventional dairy, a notoriously polluting industry. Ben & Jerry’s similarly greenwashed its brand, and although it’s made with animal products — not fake lab-created proteins — its emphasis on sustainability and environmentally friendly practices is a farce, as their ice cream has long been made with concentrated animal feeding operation (CAFO) milk that’s destroying the environment.

Lake Carmi in Franklin, Vermont, is one of the areas hardest hit by industrial dairy. Home to more than 36,000 CAFO cows, which supplied most of the dairy for Ben & Jerry’s, the once pristine lake in Franklin is now in environmental crisis, plagued by blue-green algae, also known as cyanobacteria.13

As fertilizer and manure from industrial dairy farms runs off and enters waterways, it leads to an overabundance of nutrients, including nitrogen and phosphorus, in the water — nutrients that fertilize the growth of the algae blooms now taking over.14 The point is, virtually anything would appear to be an improvement when compared to the environmental atrocities of industrialized dairy, but it’s much harder to show a benefit if compared to the gold standard — grass-fed.

Grass-Fed Is Better Than Lab Fed

Like Perfect Day, fake meat company Impossible Foods claims that they have a better carbon footprint than live animal farms, and they’ve hired Quantis, a group of scientists and strategists who help their clients take actions based on scientific evidence, to prove their point via a life cycle analysis.

According to the executive summary published on the Impossible Foods website, their fake meat product reduced environmental impact between 87% and 96% in the categories studied, including global warming potential, land occupation and water consumption.15 As is the case with Perfect Day, however, this compares fake meat to meat from CAFOs.

The EAT Forum’s largest initiative is called FReSH, which aims to transform the food system as a whole. It’s working with biotech and fake meat companies to replace whole foods with lab-created alternatives.18,19

Bill Gates is among the technocrats investing in artificially processed meat companies and buying up U.S. farmland at a frenzied pace. Tech billionaire Gates, co-founder and former CEO of Microsoft, may seem a strange fit for the role of America’s top farmer.

But he’s been quietly amassing massive tracts of U.S. land under the cover of investment firm Cascade Investment LLC, and now owns a minimum of 242,000 acres of U.S. farmland20 in Washington, Illinois, Iowa, Louisiana, California, and multiple other states.

The acreage seems earmarked for GE corn and soy crops — the base foods for what will become an increasingly synthetic, ultra-processed food supply make up of imitation meats. The strong recommendation to replace beef with fake meat is also made in Gates’ book,21 a recommendation that stems from an overreaching theme of arrogance and the desire for recolonization and a global empire.

The idea is to imply or to create an environment in which survival isn’t possible without technology. “It is a denial of the richness of agroecological knowledge and practices that are resurging around the world,” according to a report by Navdanya, a nonprofit organization promoting biodiversity, organic farming, and seed saving founded by Vandana Shiva.22

Real Food Connects Us With the Land

Shiva explains that, by embracing lab-grown food, we’re breaking the sacred relationship with food and severing humans’ age-old connections to their food and the land on which it’s grown.23

farming — free from toxic pesticides, GMOs, chemical fertilizers, and CAFOs, and regenerative in terms of the health of the soil, the environment, the animals, and rural farmers.

As Shiva put it, “Regenerative agriculture provides answers to the soil crisis, the food crisis, the climate crisis, and the crisis of democracy.”24 Fake meat and dairy produced in a lab simply can’t compare, both in terms of the environment and human health.

As has become an overriding theme of 2020 and 2021, it’s time to look past the fake food propaganda being increasingly promoted and turn back to our real roots — those that embrace the necessity of living with the land and shun the experimental technologies that threaten to take it from us.

On a small scale, you can help by supporting your local organic and regenerative farmers by purchasing their goods at local farmers’ markets or purchasing your meat and dairy products directly from your local farm, while avoiding lab-produced fake food for the sake of your health and the planet’s.