Is This the Road to Totalitarianism? Fiction or Fact? Probably fiction as the author is an award-winning American playwright, novelist and political satirist based in Berlin? 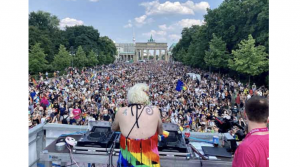 Click on the above image if you want to read more.

The “New Normal” transformed our societies into paranoid, pathologized, authoritarian dystopias where people now have to show their “papers” to see a movie or get a cup of coffee and publicly display their ideological conformity to enter a supermarket and buy their groceries.

The “New Normal” transformed the majority of the masses into hate-drunk, hysterical mobs that are openly persecuting “the Unvaccinated,” the official “Untermenschen” of the New Normal ideology.

In the UK, Italy, Greece, and numerous other countries throughout the world, this pseudo-medical social-segregation system is also being introduced, in order to divide societies into “good people” (i.e., compliant) and “bad” (i.e., non-compliant).

August 2020 … The Invasion of the New Normals

May 2021 … The Criminalization of Dissent

C.J. Hopkins is an award-winning American playwright, novelist and political satirist based in Berlin. His plays are published by Bloomsbury Publishing and Broadway Play Publishing, Inc.

His dystopian novel, Zone 23, is published by Snoggsworthy, Swaine & Cormorant.