Is SARS-CoV-2 Everywhere? – In our food and in the air? 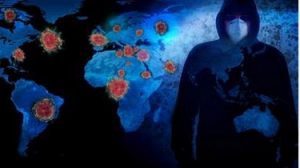 For the full article please click on the image above.

According to a November 16, 2020, report by Food Safety News,1 a Chinese investigation has revealed SARS-CoV-2 is present on many imported food products and packaging, and it’s far from a solitary incidence.

“Recent reports include detection of coronavirus on packages of shrimp from Saudi Arabia, fish from India, beef from Brazil and Argentina, and pork from Germany,” Food Safety News writes, adding:2

“The National Service of Agri-Food Health and Quality (SENASA) in Argentina said it was the first time there had been such an incident in products from the country since the pandemic began and it was investigating.

The shipment had entered through the port of Shanghai. On Nov. 9, part of it was transferred to a cold store in Nanjing City, the capital of Jiangsu. On Nov. 10, prior to release to the market, Nanjing authorities tested the product and detected nucleic acid on the outer packaging.”

Norwegian salmon, Brazilian chicken and Ecuadorian shrimp — either the food or its packaging — have also tested positive for SARS-CoV-2. At least nine Chinese provinces have reported finding SARS-CoV-2 RNA in frozen imported food since July 2020.

While the contamination has raised concerns, the International Commission for Microbiological Specifications of Foods (ICMSF) has stated the virus is unlikely to pose a food safety risk, noting that “the mere presence of an infectious agent in a food does not necessarily translate into human infection.”3

SARS-CoV-2 has also been found on particles of air pollution. According to The Guardian,4 scientists are investigating to determine whether the virus might be able to spread over long distances this way. It’s still unknown whether the virus can remain viable if hitching a ride on particles of pollution, or whether this route would distribute sufficient quantities to actually make someone sick if they inhaled it. According to The Guardian:5

“Italian scientists used standard techniques to collect outdoor air pollution samples at one urban and one industrial site in Bergamo province and identified a gene highly specific to COVID-19 in multiple samples. The detection was confirmed by blind testing at an independent laboratory …

A statistical analysis6,7 by Setti’s team suggests higher levels of particle pollution could explain higher rates of infection in parts of northern Italy before a lockdown was imposed, an idea supported by another preliminary analysis.8 The region is one of the most polluted in Europe.

The potential role of air pollution particles is linked to the broader question of how the coronavirus is transmitted. Large virus-laden droplets from infected people’s coughs and sneezes fall to the ground within a meter or two. But much smaller droplets, less than 5 microns in diameter, can remain in the air for minutes to hours and travel further …

Researchers say the importance of potential airborne transmission, and the possible boosting role of pollution particles, mean it must not be ruled out without evidence.”

Indeed, bacteria, which are much larger than viruses, have no problem traveling through the air, so there’s little reason to doubt that viruses would do so as well.

The U.S. Centers for Disease Control and Prevention’s October 5, 2020, scientific brief9,10 on SARS-CoV-2 points out the virus can spread either through large respiratory droplets (which is the only potential benefit of wearing a mask) or through small airborne particles that “can remain suspended for many minutes to hours and travel far from the source on air currents.”

In 2019, researchers discovered bacteria can be carried thousands of miles through the air,11 which complicates the containment of bacterial outbreaks. Other studies have demonstrated that antibiotic-resistant bacteria can scatter long distances by piggybacking on feedlot dust.12

The most compassionate approach that balances the risks and benefits of reaching herd immunity, is to allow those who are at minimal risk of death to live their lives normally to build up immunity to the virus through natural infection, while better protecting those who are at highest risk. ~ The Great Barrington Declaration

An article13 by BGR, published in April 2020, found walkers, runners and cyclists may need to maintain a distance of up to 66 feet in order to avoid exposure when exercising outdoors. BGR writes:14

“The research,15 which was conducted by an international team including scientists in Belgium and the Netherlands, studied the impacts of current social distancing mandates when applied to outdoor exercise …

Outdoor trails present a unique challenge, as individuals are breathing heavily and potentially even coughing or sneezing along the way. If a second person is following behind, even at what would be considered a ‘safe’ distance for indoor interaction, they would quickly come into contact with particles in the air that could contain the virus …

Based on the simulations and data, the team suggests that individuals who are walking outdoors should maintain a minimum of four meters (13 feet) of separation.

Runners and casual bikers should try to stay at least 10 meters apart (33 feet), and fast cyclists should attempt to remain at least 20 meters (66 feet) from others using the same trails. The researchers also note that avoiding the direct path of the person in front of you is vital, even when maintaining these distances.”

The irony here is that the authors make it sound as though you can somehow avoid the virus provided you follow certain rules, like staying a certain distance away and avoiding having another person directly in front of you. Logic would tell you that once the virus is in the air, it’s going to move with the air in whatever direction the air is moving.

Can you hide from wind? Can you hide from air? If these studies tell us anything, it’s that we cannot hide from this virus. We cannot separate ourselves from others far enough to where transmission risk is eliminated.

And, as detailed by Denis Rancourt in our July 2020 interview, the research clearly shows that masks cannot prevent the spread of airborne viruses, so you hiding behind a mask won’t do you much good either. If air can flow through the mask, the virus can flow through as well. All a mask can do is limit the spread of large contaminated respiratory droplets.

The failure of masks is also evident in recent CDC data16,17,18 showing that 71% of COVID-19 patients reported “always” wearing a cloth mask or face covering in the 14 days preceding their illness; 14% reported having worn a mask “often.” In all, 85% of COVID-19 patients had been diligent about mask use, yet this did not protect them from the virus.