If the scientists’ models were wrong, why are we in national lockdown? 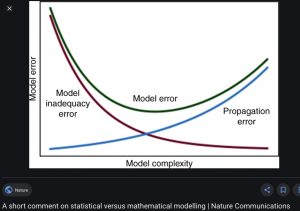 I couldn’t resist copying this article by Allison Pearson & Liam Halligan from the Daily Telegraph today, my thanks to you both for this important article. My followers may like to read my blog from the beginning of the Covid pandemic “Coronavirus Through The Looking Glass” by Dr. Jayne Donegan that expressed the same serious concerns about the lack of transparency of Sir Patrick Vallance’s algorithms. NOTHING CHANGES!

Back in the pre-Covid era, whenever a tabloid devoted its front page to news of the latest model, readers could expect something salacious. An aging MP’s “close friendship” with a young aspiring actress, perhaps? Or gossip about the love life of the latest catwalk star.

These days, the “latest model” makes headlines across all types of newspapers. But the articles are more frightening than fun. For mathematical models, built by faceless scientists across Whitehall and academia, have lately been used to generate terrifying predictions of Covid hospital admissions and deaths.

Such models and the boffins build them, had been driving the Government’s approach to tackling this virus. Why the return to national lockdown last week? Because of official scientific advisers citing bloodcurdling forecasts of Covid-related related carnage.

Their modeling showed Covid-19 cases “doubling every seven days” resulting in a predictive 50,000 new cases every day by mid-October. No other scenario was presented. In the event, despite ever more testing, cases were barely a third of that.

Going into this latest lockdown, Vallance and Whitty were at it again, warning that by December, more than 4000 people could die each day from Covid-19 – four times higher than the April peak of this pandemic. This new doom graph, unveiled at yet another Downing Street press conference, drove countless “4000-deaths-a-day” headlines. It was Exhibit A as Boris Johnson tried to justify a renewed lockdown, having previously ruled it out

It soon became clear, though, that the modeling work behind the latest horror graphic was already a month out of date when it was paraded on prime-time television. During that month, Covid-19 cases and deaths had been much lower than the model predicted. So why was it still being used?

To hit 4000 daily deaths by December, under the same model, Covid fatalities would have needed to be at 1000 a day by early this month, the time of the pre-lockdown press conference.

The actual number was little more than a quarter of that.

Clearly, some 250 deaths per day represent much grief and tragedy of the families concerned. But the figures also suggest this so-called “second wave”, far from peaking at a death rate four times higher than in April, is set to be less severe.

A few days into lockdown, the Vallance/Whitty modeling fell apart completely. Official predictions that have pushed the country into a second lockdown were quietly revised so that the projected that is no longer outstripped the 1000-a-day April peak. This is vitally important, and not just in terms of immediate human suffering. Because when we had around 1000 deaths for a few days during early April, the NHS coped even without the aid of temporary Nightingale hospitals.

So if “4000-deaths-a-day” is nonsense, and official forecasts of the second wave are now below what we saw in spring, again, there is no danger of the NHS being overwhelmed. And that raises very serious questions indeed about why we are now back in lockdown

Parliament is finally stirring. Yes, the House of Commons passed these new restrictions with a large majority last week, but there was stern questioning of “the science” by some notable rebels.

“The first lockdown was triggered by modeling from Imperial College and was grossly inaccurate”, boomed Sir Graham Brady, the chairman of the influential 1922 committee of Tory backbenchers. “And this second one appears to be predicted on implausible projections of Covid deaths in the coming weeks.”

Another backbench broadside came from to Theresa May, last seen in tears at a lectern outside Downing Street. The former prime minister had since regained her poise. “The 4000-deaths-a-day prediction was wrong before it was even used,” May told the Tory frontbench. “It looks like figures are being chosen to support the policy rather than the policy being based on the figures.”

She went on, urging ministers “to assess the cost of lockdown, in terms of non-Covid deaths due to lack of NHS treatment, domestic abuse, mental health, possibly more suicides and of, of course, the cost to the economy, jobs lost, livelihoods shattered, businesses failing, whole sectors damaged”.

It was a powerful intervention, by a politician with personal scores to settle, yes, but who may yet have big political cards to play.

The Prime Minister walked out of the chamber while his predecessor was speaking- a move that may come back to bite him.

Join us on a metaphorical rocket of right-thinking, our capsule of common sense, by listening to the Planet Normal podcast – out every Thursday. It’s free – at telegraph.co.uk/planetnormal or via iTunes, Spotify or wherever you get your podcasts.