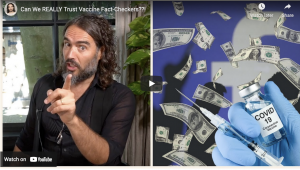 Have you ever wondered who is behind Facebook’s fact checks? FactCheck.org is funded, in part, by the Robert Wood Johnson Foundation, which holds nearly $2 billion in Johnson & Johnson stock. “Bless your heart if you think factcheck.org is an unbiased source of vaccine information,” Massie tweeted.6

According to FactCheck.org, they began a “SciCheck” feature in 2015 that was intended to “increase public knowledge and understanding of science and scientific research.” In December 2021, they launched SciCheck’s COVID-19/Vaccination Project, which, they state, aims “to increase exposure to accurate information about COVID-19 and vaccines, while decreasing the impact of misinformation.”7

Conveniently, SciCheck’s COVID-19/Vaccination Project was made possible by a grant from the Robert Wood Johnson Foundation, which not only holds billions of Johnson & Johnson stock but was founded by the late Robert Wood Johnson II — Johnson & Johnson’s president from 1932 to 1963.8 What’s more, its CEO, Richard Besser, is a former (2009) director of the U.S. Centers for Disease Control and Prevention.9

FactCheck.org states, “The foundation has no control over our editorial decisions,”10 but Facebook’s “independent” arbiters are profiting from the vaccines. “Who pays the paychecks of the factcheckers?” Massie tweeted, again pointing out the glaring conflict that “The vaccine fact checkers at @factcheckdotorg, who claim to be independent, are funded by an organization that holds over $1.8 billion of stock in a vaccine company, and is run by a former director of @CDCgov.”11

Daniel Horowitz, senior editor at The Blaze, put it this way, “In other words, the vaccine companies control the flow of information about vaccines. Welcome to the world of ‘independent fact checkers.’”12

What happens when heavily conflicted “fact checkers” control the narrative on social media? Open debate is silenced and science is stifled. It’s comical that FactCheck.org has the gall to state, “[T]he views expressed here do not necessarily reflect the views of the foundation.”13

“In fact,” Horowitz said, “the views expressed almost assuredly do reflect the views of the foundation … have you ever seen the organization offer balanced coverage or flag a single post on the other side of this debate as false, no matter how outlandish the claim might be, including articles advocating experimental emergency use authorization vaccines for little children?”14

Horowitz is among those who, like me, have had information they shared censored if they questioned the science behind lockdowns and mask mandates. Other commonly “flagged” articles may discuss potentially lifesaving drugs like ivermectin or mention vitamin D15 and zinc for SARS-CoV-2. But nothing has been more heavily targeted by fact checkers than vaccine “misinformation.”

“Indeed, we all know the goal is to promote only positive information and zero concerns about the vaccine at all costs,” Horowitz stated. “Facebook, which is the largest promoter of their [FactCheck.org’s] work, has openly made this its policy.”16

NewsGuard is another self-appointed internet watchdog that sells a browser plugin to rate websites on nine criteria of credibility and transparency. It has also been tracking Facebook pages that it claims are “super-spreaders” of COVID-19 information.17 NewsGuard received much of its startup funds from Publicis Groupe, a giant global communications group with divisions that brand imaging, design of digital business platforms, media relations and health care.

Publicis Groupe’s health subsidiary, Publicis Healthcare Communications Group, and its several subsidiaries name Pfizer, Abbott, Allergan, Merck, Astra Zeneca, Sanofi, Bayer and what they describe as “40 clients in the life sciences industry which includes being a preferred partner with 13 of the top 20 global pharmaceutical companies.”18 In fact, the PR firm that created and ran Purdue Pharma’s deceptive marketing campaigns for the opioid Oxycontin is none other than Publicis.

At the beginning of May 2021, the Massachusetts attorney general filed a lawsuit19 against Publicis Health, accusing the Publicis subsidiary of helping Purdue create the deceptive marketing materials used to mislead doctors into prescribing OxyContin.

Overall, Publicis appears to be playing an important role in the global censorship of information relating to COVID-19, and Publicis Health admitted its involvement in this agenda in an April 2021 tweet, in which the they announced its partnership with NewsGuard, “to fight the ‘infodemic’ of misinformation about COVID-19 and its vaccines.”20

NewsGuard is clearly in the business of censoring the truth and previously classified Mercola.com as fake news because we reported the SARS-CoV-2 virus as potentially having been leaked from the biosafety level 4 (BSL4) laboratory in Wuhan, China.

Seeing how Publicis represents most of the major pharmaceutical companies in the world and funded the creation of NewsGuard, it’s not far-fetched to assume Publicis might influence NewsGuard’s ratings of drug industry competitors, such as alternative health sites. Being a Google partner,21 Publicis also has the ability to bury undesirable views that might hurt its clientele.

NewsGuard’s health-related service, HealthGuard,22 is also partnered with the Center for Countering Digital Hate (CCDH) — a progressive cancel-culture leader23 with extensive ties to government and global think tanks that has labeled people questioning the COVID-19 injection as “threats to national security.”

These connections, taken together, explain how views that counter the official narrative can be so effectively erased. One of Publicis’ selling points is “the power of one.”24 It’s a one-stop shop, offering clients seamless end-to-end “marketing, communication and digital transformation, driven through the alchemy of data, creativity, media and technology, uniquely positioned to deliver personalized experience at scale.”25

In addition to being a global hub for pharmaceutical marketing as a partner of the World Economic Forum,26 which is leading the call for a Great Reset of the global economy and a complete overhaul of society,27 Publicis is also linked to the technocratic, transhumanist deep state.

Censoring COVID-19 truth and manufacturing pro-industry propaganda simultaneously serves three key masters — Big Pharma, Big Tech and the deep state — as the pandemic is fueling a manufactured psychological operation designed to usher in the Great Reset, all while allowing Big Pharma to make a killing on pandemic vaccines and using the “need” for vaccination as justification for biosurveillance.

Preventive strategies and alternative therapies, perhaps? And it doesn’t matter how much science there is to support such therapies, because it’s not about science. It’s about controlling what you believe works.

Social and mainstream media have played an outsized role in deciding who is an “expert” worthy of sharing information and who is not, while those who question the “expert” data or ask for more evidence are vilified — a “dismissive, authoritarian approach ‘in defense of science,’” according to John Ioannidis, professor of medicine and professor of epidemiology and population health at Stanford University, in Tablet.28

The end result is an altered reality in which heavily conflicted corporations have emerged as regulators of society instead of being regulated themselves:29

“Other potentially conflicted entities became the new societal regulators, rather than the ones being regulated. Big Tech companies, which gained trillions of dollars in cumulative market value from the virtual transformation of human life during lockdown, developed powerful censorship machineries that skewed the information available to users on their platforms.

Consultants who made millions of dollars from corporate and government consultation were given prestigious positions, power, and public praise, while unconflicted scientists who worked pro bono but dared to question dominant narratives were smeared as being conflicted.”

Social media and its fact checkers are also skewing science itself via their conflicted “misinformation” labels.

Even healthy skepticism has become viewed as intolerable, while the COVID-19 science cult — made “out of science, expertise, the university system, executive-branch ‘norms,’ the ‘intelligence community,’ the State Department, NGOs, the legacy news media, and the hierarchy of credentialed achievement in general”30 — has been held as gospel during the pandemic.

Increasingly, Big Tech is being trusted to dictate the truth, via conflicted fact checkers indebted to Big Industry through their funding. It’s dangerous to rely on any one source or group of individuals as authorities on truth, as it sets up the path for inevitable censorship. Even under the best circumstances, everyone is subject to their own biases, and when billions of dollars are involved, the bias is impossible to ignore.

Yet, it remains true that the path to the truth depends on continued scientific exploration, open debate, challenges and skepticism — all things that are now being challenged by fact checkers on social media and increasingly seen as anathema due to the authoritarian and conflicted control that has taken over during the pandemic.