A Year Without Santa Claus? 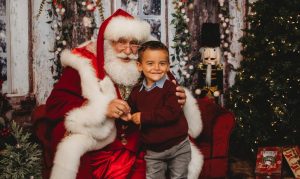 Can we trust all the information we are being given? Click on the image to learn more.

While lockdowns were supposed to be temporary — initially just a couple of weeks to “flatten the curve” — nine months into the COVID-19 pandemic, there’s still no end in sight. Thanksgiving was canceled in many parts of the U.S., and many government leaders are now urging residents to cancel their Christmas celebrations too.

What many still don’t realize is that the global response to the COVID-19 pandemic has little to do with the spread of an actual virus, and everything to do with the planned global takeover and implementation of a technocratic agenda known as the Great Reset.

Universal mask mandates, social distancing, business shutdowns, online shopping, working and learning, CRP testing and quarantining of asymptomatic individuals are all forms of “soft indoctrination” to get us used to an entirely new, and unfathomably inhumane, way of life devoid of our usual rights and freedoms.

In addition to being a poster boy for technocracy, Schwab also has a strong transhumanist bend, and wrote the book on the Fourth Industrial Revolution, a hallmark of which is the merger of man and machine, biology and digital technology.1

According to Winter Oak — a British nonprofit social justice organization — Schwab and his globalist accomplices are using the COVID-19 pandemic “to bypass democratic accountability, to override opposition, to accelerate their agenda and to impose it on the rest of humankind against our will.”

Indeed, Schwab’s book,2,3 “COVID-19: The Great Reset” urges industry leaders and decision makers to “make good use of the pandemic” and “not letting the crisis go to waste.”

While the Great Reset plan is being sold as a way to make life fair and equitable for all, the required sacrifices do not apply to the technocrats running the system.

On the contrary, as noted by Patrick Wood in his recent interview with James Delingpole, featured in “Technocracy and the Great Reset,” the wealth distribution and circular economies promoted by the technocratic elite will never benefit the people, because what they’re really referring to is the redistribution of wealth from the people, to themselves.

Evidence of this can be seen in the decision to allow big box stores to remain open during the pandemic while forcing small businesses to close, no matter how small the infection risk.

There’s really no rhyme or reason for such a decision, other than to shift wealth away from small, private business owners to multinational corporations. Walmart and Target, for example, report record sales this year4 while more than half of all small business owners fear their businesses won’t survive.5

Never before has America seen such an accumulation of wealth in so few hands. ~ Frank Clemente, executive director, Americans for Tax Fairness

Yelp’s September 2020 economic impact report showed that, as of August 31, 2020, 163,735 U.S. businesses had closed and 60% of them are permanent closures.6 Similarly, while working-class Americans filed for unemployment by the tens of millions, the five richest men in the U.S. — Jeff Bezos, Bill Gates, Mark Zuckerberg, Warren Buffett and Larry Ellison — grew their wealth by a total of $101.7 billion (26%), between March 18 and June 17, 2020, alone.7

Since the beginning of the pandemic, the collective wealth of 651 billionaires in the U.S. rose by more than $1 trillion (36%).8 To put their current wealth in perspective, the assets of these 651 billionaires is nearly double that of the combined wealth of the least wealthy 165 million Americans. As noted by Frank Clemente, executive director of Americans for Tax Fairness, “Never before has America seen such an accumulation of wealth in so few hands.”9

That’s technocratic wealth redistribution for you. Ultimately, the Great Reset will result in two tiers or people: the technocratic elite, who have all the power and rule over all assets, and the rest of humanity, who have no power, no assets and no voice.

That the COVID-19 pandemic is a form of class war is also evident in the way rules are enforced. While citizens are threatened with fines and arrest if they don’t do as they’re told, those who lay down the rules repeatedly break them without repercussions.

The reason technocratic world leaders and their loyal minions are now calling for the cancellation of Christmas is — as illustrated in our Christmas parody above — because of PCR testing. The number of positive tests are reportedly on the rise, which is said to be proof that the infection is spreading out of control.

However, evidence shows there’s no relationship between positive tests and deaths, and the reason for this is because the false positive rate for the PCR test is extraordinarily high. We’re simply quarantining and preventing healthy people who pose no risk to anyone from living their lives.

A September 28, 2020, study10 in Clinical Infectious Diseases revealed that when you run a PCR test at a cycle threshold (CT, i.e., the amplification rate) of 35 cycles or higher, the accuracy drops to 3%, resulting in a 97% false positive rate.

According to an April 2020 study11 in the European Journal of Clinical Microbiology & Infectious Diseases, to get 100% confirmed real positives, the PCR test must be run at no more than 17 amplification cycles.

Meanwhile, the U.S. Food and Drug Administration and the U.S. Centers for Disease Control and Prevention recommend running PCR tests at a CT of 40,12 and Drosten tests and tests recommended by the World Health Organization are set to a CT of 45.

By using CTs known to result in false positives, you end up with the appearance of widespread infection, which is then used to keep the pandemic measures going. In reality, COVID-19 has not resulted in excess deaths13,14,15 and were it not for the fact that it’s being used as a cover for the Great Reset, life would have returned to normal months ago.

According to Dr. Roger Hodkinson, one of Canada’s top pathologists and an expert in virology, the COVID-19 pandemic is the “greatest hoax ever perpetrated on an unsuspecting public.”16 Hodkinson is the CEO of Western Medical Assessments, a biotech company that manufactures COVID-19 PCR tests.

Michael Yeadon, Ph.D., a former vice-president and chief scientific adviser of the drug company Pfizer and founder/CEO of the biotech company Ziarco, is also speaking out about how fraudulent PCR testing is being used to manufacture the appearance of a pandemic that doesn’t really exist, as are Dr. Lee Merritt, members of the German Corona Extra-Parliamentary Inquiry Committee17,18 and many others.